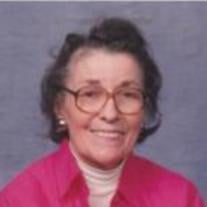 Dear Family and Friends: My mother, Eda Marie (Marty) Jones passed away on January 19, 2011 after an extended illness. She lived a long life! She was 99 years old when she died and would have been a 100 years old on April 23, 2011. Mom was born and raised on a 40 acre farm south of Ramsey, IL Her parents were Theodore Marty (1867 -1941) and Margaret Thull (1873 -1963). My mother was the 6th of 9 children: 1) Katherina Marty Rakers, 2) Johanna Marty, 3) Joseph Marty, 4) Martha Marty Norris, 5) Clara Marty, 6) Eda Marty Jones, 7) Margaret Marty, 8) Lillian Marty Reiser, and 9) Leo Marty. Of the nine children, only Uncle Leo survives. He is 93 years old and lives in a nursing home in Pana. Being born in 1911, my mom was 18 years old when the depression hit our country. She would tell me stories of poor people coming to their door asking for food. The Marty family kept their 40 acre farm during those depression years, but it was not easy. I always loved to hear my aunts and uncles and my great aunts and uncles tell stories of "the olden days." Like all of her sisters and brothers, she would periodically go to live in St. Louis or Springfield or other cities, and send as much money home as she could "to the folks" so they would not lose the farm during the lean years of the depression. I remember that she told me she was so poor that she ate corn flakes with water since she couldn't afford to buy any milk. This was while she lived in St. Louis. When living in St. Louis, Mom somehow got jobs as a housekeeper for some wealthy families, including the August Busch family. She traveled with these families and would cook and take care of the children. Mom was able to see northern Michigan and update New York and told how beautiful these parts of the country were. I never knew this till much later, but she used to help host parties at the Busch residence for the St. Louis Cardinal baseball players. So she got to meet Joe DiMaggio, Stan Musial, Jackie Robinson and other famous players from that era. In March, 1938 Mom graduated from The Springfield (IL) School of Beauty Culture and later she and her sister Martha had a beauty salon in Assumption, IL. Sometime in the late 1940's mom met a fellow named Harry R. Jones at a dance. I have no idea how long they dated, but mom and dad were married on February 17, 1949. They were married at St. Joseph's Church in Ramsey, IL by Father Forster. My mom and dad ended up buying a little brick home on Pardella Street in St. Louis. They had a little gift shop on Gravois Avenue in St. Louis. I was born in 1952. Dad was diagnosed with cancer and, from what I understand, was sick for about a year, before he died on July 20, 1955. My mom always said how very hard this was for her. And how much she loved Harry. She was not a city girl, and decided to move back to Illinois to be near her family. We moved to Pana, IL, just 17 miles north of Ramsey in 1956. She never moved away from Pana. Mom was a devout Catholic all of her life. As many of you know, she loved to cook, work outside, talk with her friends, go for walks, and go to Mass, sometimes twice daily. She never learned to drive and would carry home groceries. She was strong! I am sure all of her walking allowed her to live to be 99 years old. Mom was beside herself when she became a grandmother. When we moved back to Illinois in 1986, my little children (Rachel and Grace) and I would spend many Sunday afternoons eating a great meal, including home made pie, then going for a long Sunday afternoon drive. Mom first went to the Friendship Manor in the fall of 1995, when she was 84 years old. But she got better and was able to live at home for about six months before returning to the nursing home, first in Pana, and then in St. Elmo in March, 1998 where she lived until she passed away this month. There are so many people to thank at this time, many of whom have passed on. Her immediate family was always wonderful to her and so were her many friends from church and her neighbors. I want to thank all of you who helped her down through the years by giving her rides, supporting her, and just being her friend. I know Mom really appreciated everyone who helped her down through the years. And the staff at the two nursing homes were wonderful as well. Please feel no obligation to attend the services listed below. But on the other hand it would be great to see you! Thank you. Ed Jones

Dear Family and Friends: My mother, Eda Marie (Marty) Jones passed away on January 19, 2011 after an extended illness. She lived a long life! She was 99 years old when she died and would have been a 100 years old on April 23, 2011.... View Obituary & Service Information

The family of Eda Jones created this Life Tributes page to make it easy to share your memories.

Send flowers to the Jones family.