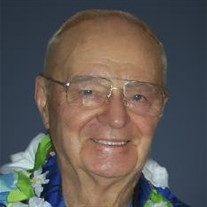 – Franklin M. “Frank” Sarver, Jr., 89, of Morton passed away Wed., July 18, 2018 at OSF St. Francis Medical Center in Peoria. Frank was born on Sept. 21, 1928, in Shelbyville, Ill., to Franklin and Mary Jane (Black) Sarver, Sr. He married Beatrice A. Sphar on July 16, 1950, in Pana, Ill. She preceded him in death on Dec. 25, 2010. He was also preceded in death by one great-granddaughter, Londyn Reed. Surviving are three daughters, Cindy (Warren) Bethel of Chicago, Sandra (Joe) Cotter of Henderson, Tenn., and Wendy (Jay) DeFrees of Morton; and one son, Scot Sarver of Morton. He is also survived by four grandchildren, Ashley (John) Scroggins, Amy (Marques) Reed, Colin DeFrees, and Justin DeFrees; and three great-grandchildren, Lyla and Lydia Reed, and Malachi Scroggins. Frank enjoyed his family, children, and great-grandchildren, sharing many stories about them often and was a compassionate man. He worked for Caterpillar, Inc. for 35 years, starting in Decatur and retiring from Peoria in 1990 as a Senior Computer Systems Analyst. Frank was a United States Army veteran having served during the Korean War. He was a member of the Morton American Legion Post 318, and later became an active member of the Korean War Veterans Association serving in many leadership roles including chaplain. He coached the local 4-H girls’ softball team for many years. Frank also enjoyed many global traveling experiences throughout the United States, Mexico, Bahamas, Europe, Africa, Israel, Australia, and New Zealand. He was a member of and very active in the East Peoria Church of Christ. Engaged in teaching, preaching, and serving others, including working in the Food Pantry and organizing Operation Sleighbell in the Peoria area. Frank did winter mission work in Marsh Harbour, Abaco, Bahamas for 18 years conducting personal Bible studies as well as teaching and preaching lessons to the congregation. He also was a lecturer at the Zambian Church of Christ Lectureship one summer. Later Frank demonstrated his enthusiasm for politics by becoming an active member of the Tea Party movement. Services for Frank will be held in both Morton, Ill. and also in Herrick, Ill. David Caskey of the Bahamas Mission of Palm Beach Gardens, Fla., will officiate all services. In lieu of flowers, memorials may be made to the Bahamas Mission Church of Christ and sent to: David Caskey-Missions, in care of Gulf Coast Church of Christ, 9550 Ben C. Pratt/Six Mile Cypress Parkway, Fort Myers, FL 33966 or Zambia Mission Fund, 3103 E. Memorial Road, Edmond, OK 73013. To view Frank’s video tribute or to leave an online condolence for the family, visit www.knappjohnson.com.

The family of Franklin M Sarver created this Life Tributes page to make it easy to share your memories.

Send flowers to the Sarver family.