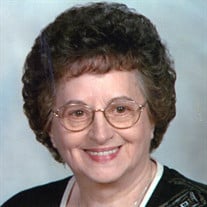 Georgia Irene Berryman, 83 of Altamont, Illinois died Friday, January 3, 2020 at Lutheran Care Center in Altamont, Illinois. In accordance with her wishes, cremation rites have been accorded and no funeral services are planned. Inurnment will... View Obituary & Service Information

The family of Georgia I Berryman created this Life Tributes page to make it easy to share your memories.

Send flowers to the Berryman family.