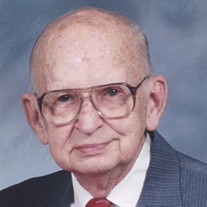 Gerald F. Kennedy, 99, of Pana passed away at 2:10pm Thursday, December 18, 2014 at the Heritage Health in Pana. Visitation will be from 4:00 pm to 6:00 pm on Sunday, Dec. 21st at the Kennedy & Sons Funeral Home in Pana. There will be a prayer service led by Fr Rodney Schwartz at 3:30 pm in the funeral home. Further visitation will be from 9:00 – 9:30am on Monday, December 22 followed by a 10:00 am Mass of Christian Burial at St. Patrick's Catholic Church in Pana. Burial will be at the Calvary Cemetery Pana Illinois. Memorials may be made to the Sacred Heart Grade School in Pana, the Pana Carnegie-Schuyler Library, or to the charity of the donor's choice. Gerald was born March 12, 1915 in Shelbyville, IL to Dennis J. and Anna U. (Hines) Kennedy. He married Luanna R. Werner on December 6, 1943 in Tallahassee, Florida. He graduated from Pana Township High School in 1933, and was a graduate of the Cincinnati College of Mortuary Science class of 1937. He served in the U.S. Army from 1942 through 1945, serving as a surgical technician at a military hospital in Tallahassee, Florida. Following his military service he returned to the Pana and joined his brothers and father as a licensed Funeral Director and Embalmer with DJ Kennedy & Sons Funeral Home. He was honored by the Illinois Funeral Directors Association in 1980 for his 55 years as a licensed Funeral Director. A member of St Patrick’s Catholic Church, he was also an active member of the local Knights of Columbus chapter. Gerald is survived by his children John Patrick, wife Linda Kennedy of Springfield, Illinois, Ann Marie, husband Ray Harrier of Greenwood, Indiana, and Michael Gregory, wife Patrice Kennedy of Brimfield, Illinois. Also surviving are grandchildren Daniel, wife Rebecca Kennedy of Mequon, Wisconsin, Katherine , husband Grant Barksdale of Springfield, Illinois, Andrew, wife Jenni Harrier of Greenwood, Indiana, Brian, wife Autumn Harrier of Hanalei, Hawaii, Brennan Kennedy of Peoria, Illinois and Colleen, husband Zack Donlan of Peoria, Illinois, and eight great-grandchildren. Gerald was preceded in death by his wife Luanna who died March 29, 2010. He is also preceded in death by his parents, three brothers: J Cyril, Eugene P, and C Raymond Kennedy and four sisters: Helen Godfrey, Mary Shea, Eleanor Kennedy, and Veronica Endris.

The family of Gerald F Kennedy created this Life Tributes page to make it easy to share your memories.

Send flowers to the Kennedy family.