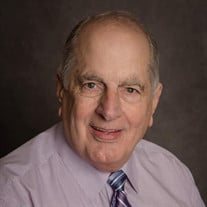 Jim Stepping, 82 of Pana, Illinois died Saturday, October 17, 2020 at the Pana Community Hospital. Visitation will be held Thursday, October 22 from 4-6 PM in the Kennedy & Sons Funeral Home. The Funeral Mass will be held Friday, October 23 at 10 AM in St. Patrick’s Catholic Church in Pana with burial following in Calvary Cemetery Pana. Carl James Stepping was born July 13, 1938 in Pana the son of Carl and Margaret (Stauder) Stepping. He was raised in Pana having attended Sacred Heart School and Pana High School where he graduated with the Class of 1956. Immediately following high school, Jim served in the U.S. Army and was stationed at Ft. Leonard Wood. Jim married Marilyn “Mitzi” Gruber on June 25, 1960 in St. Patrick’s Catholic Church. Jim was previously employed with Jim Dagon Clothiers, Mallory Timers, and National Greenhouse Manufacturing, where he served as Vice President. Jim subsequently became Office Manager to Pana Medical Group until his retirement in 2018. Jim was a member of St. Patrick’s Catholic Church, Pana Knights of Columbus, Pana Elks, and the Pana Country Club and was an avid St. Louis Cardinals fan to the end. He enjoyed attending all his grandchildren’s sporting activities. Jim is survived by his wife, Mitzi of Pana, his daughter, Mary Ludolph and husband Doug of Springfield, his grandchildren, Sophie, Vance, Jack, Dean and Ty Ludolph, and many nieces and nephews. Jim was preceded in death by his parents and his only brother Joe who died in 2009. Memorials may be made to Pana St. Patrick’s Catholic Church and Pana Community Hospital.

The family of James "Jim" Stepping created this Life Tributes page to make it easy to share your memories.

Send flowers to the Stepping family.