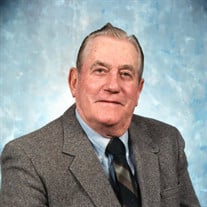 James E. Vits, 89 of Cheboygan, Michigan, formerly of Tower Hill, Illinois died Wednesday, September 2, 2020 at his residence there. Funeral services will be Tuesday, September 8, 2020 at 11:00 AM at Kennedy & Sons Funeral Home, Pana with Pastor Steve Switzer of Calvary Baptist Church, Taylorville officiating. Visitation will begin at 10:00AM until service time, again at Kennedy & Sons. Burial will be in Calvary Cemetery, Pana Township, Christian County, Illinois. Memorials may be made to Boys Town, Nebraska. James E. Vits was born August 19, 1931 in Pana Township on the family farm. He attended Hickory School, Green Valley Country School, and graduated Pana High School with the Class of 1950. James E. Vits enlisted in the U.S. Air Force in 1951 and was stationed first in Biloxi, Mississippi and later in Del Rio, Texas where he was honorably discharged in 1955 as a Korean Conflict veteran, working mostly as a jet mechanic. James E. Vits married Marilyn Gruen in 1953, and they had five children. He was employed at the Pana Oil Refinery from 1955 to 1960, when he started farming and raising Charolais cattle and other farm livestock. Jim enjoyed dancing, fishing, and taking his children roller skating at Elvers and later Zumwalts. He was especially known for his “gift of gab” and witty sense of humor. James E. Vits is survived by Daughters: Mary Ann Powell of San Diego, California; Linda Carroll Greene (Joe) of Cheboygan, Michigan; Nancy Simpson (Rob) of Pana: and Sharon Walter (Jim) of Tower Hill; Son: Gary Vits of Decatur; several Grandchildren and Great-Grandchildren. He is preceded in death by his Brother: Joseph Vits and his Sister: Joyce Havrilka.

The family of James "Jim" Vits created this Life Tributes page to make it easy to share your memories.

Send flowers to the Vits family.