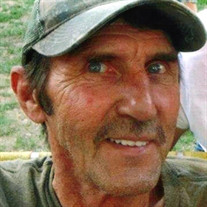 Jan Ralph Hadowsky, 65, of Pana, Illinois passed away on Saturday, May 23, 2020 lovingly surrounded by his daughter Melissa and Sister Mary. He was born April 22, 1955, the son of Ferdinand and Beulah (Koontz) Hadowsky. Jan attended Sacred Heart School and was a 1973 graduate of Pana Senior High School. He married Renee Mundy on June 1, 1979. Together they had a daughter, Melissa Rae. Jan worked for Foor’s Truck Parts, GSI, and he was an electrician for Pana Appliance & Electric Service, a business established by his father in the early 1950’s and continued on with him and his brother, Smoke. Later he worked for Hankins Construction in which he was part of the crew that built the Save-A-Lot store in Pana. Jan enjoyed spending time with his family and friends, gardening, tinkering in the garage (in which he always had a task at hand). He also enjoyed listening to music, dancing, going to garage sales, playing pool, and watching Law and Order. Jan was very detail oriented, and his motto was “don’t let nothing bring you down.” He was a lifelong member of St. Patrick’s Catholic Church in Pana. Jan Hadowsky is survived by his Daughters: Melissa (Kenny) Toney of Pana. Twin Daughters, Bridgett and Brittany Blodgett of Nokomis. He is blessed with four grandchildren: Makayla, Izaq, Quentin, and Harry. He is also blessed with a great-grandson, Bentley. Brother: Smoke (Bunita) Hadowsky, Sisters Patricia Clutter, Sharon (Mike) Stortzum, and Mary Rhodes. Several nieces and nephews, who love him dearly, including his “niece nurse” Jordan and his buddy, Cory. Jan is preceded in death by his parents; brother Fred, sister Susie, and Brothers-in-Law Darrell and Merle. Funeral services will be Saturday May 30, 2020 at Kennedy & Sons. Graveside Services will be Friday June 5, 2020 at 2:00 PM in Calvary Cemetery, Pana, Illinois with Father Rodney A. Schwartz officiating. Memorials in Jan’s honor may be made to the Hadowsky Family. The family is being served by Kennedy & Sons Funeral Directors, Pana, Illinois.

Jan Ralph Hadowsky, 65, of Pana, Illinois passed away on Saturday, May 23, 2020 lovingly surrounded by his daughter Melissa and Sister Mary. He was born April 22, 1955, the son of Ferdinand and Beulah (Koontz) Hadowsky. Jan attended Sacred Heart... View Obituary & Service Information

The family of Jan Ralph Hadowsky created this Life Tributes page to make it easy to share your memories.

Jan Ralph Hadowsky, 65, of Pana, Illinois passed away on Saturday,...

Send flowers to the Hadowsky family.