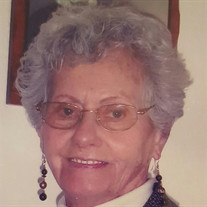 86 year old, Louise G. Van Laningham died Wednesday, August, 3, at her residence in Mt. Olive Illinois. Cremation rights have been accorded. Louis G Van Laningham was born January 15, 1930, in Ironton, Missouri. The child of Irvin and Lura (maiden name Crocker) Boulch, she grew up in Missouri with her large family and later moved to Pana when she was around 13 years of age. Louise was very family oriented so she was a homemaker for the majority of her life. She enjoyed gardening whenever she could and attending senior dances. She survived in death by her daughter, Teresa Tibbey of Big Rapids Michigan. Her brothers: Winford Boulch and wife Vivian Boulch, of Wood Burn, Oregon, and Benny Boulch of Stanton, Illinois. Her sisters: Elvira Melchert, Mt. Olive, Hettie Knotts and husband James Knotts, Mt. Olive, Shirley Boulch, Litchfield, and Penny Earhart and husband Conrad Earhart of Dover, Tennessee, Along with numerous nieces and nephews. She is preceded in death by her Husband, Robert Van Laningham, four brothers, one sister, and her parents. Family is being served by Kennedy& Sons Funeral Home, Pana IL. Condolences can be made at www.kennedypana.com

The family of Louise G Van Laningham created this Life Tributes page to make it easy to share your memories.