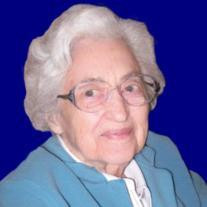 98 year old, Madelaine Trumper Husic of Chevy Chase Maryland, formerly of, Pana died Wednesday, November, 21, at 11:30 AM in her residence. Madelaine Trumper was born Wednesday, September, 2 1914, in Pana the daughter of Leo Paul and Magdalena (maiden name Yench) Trumper. Madelaine was a graduate of Sacred Heart School and Pana Township High School class of 1932. In May of 1937 Madelaine began her career with the federal government working as a clerk typist at the United States Department of Justice. While living in Washington she attended George Washington University at night. In October of 1938 Madelaine transferred to the Justices Department’s Bureau of Prisons. A World War II veteran she enlisted in the Women’s Army Auxiliary Air Corps (WAAC) December 11, 1942. Upon completion of Army administration school at Des Moines Iowa she was assigned to the Office of the Adjutant, Randolph Air Field Texas. In January 1944, she began overseas training at Fort Oglethorpe Georgia. She was then assigned to the first division headquarters of the 8th Air Force at Brampton Huntington England. Corporal Madelaine served there doing clerical work in the office of special services (OSS) and later in the office of the division chaplain. She served in Normandy, Northern France, Ardennes, Rhineland, and the Air Offensive Europe. She was awarded the European-African-Middle Eastern Theater Ribbon with silver battle star, overseas service bars and good conduct medal. Corporal Madelaine Trumper Husic was discharged on October 3, 1945 at Ft. Sheridan, Illinois. She returned to service with the Overseas Forces, European Theater, Nurnberg Germany, in January 1946. She worked with the judicial proceedings at the Nurnberg War Crime Trials, returning to Washington after one year of service at the War Crimes Trials. Upon her return to the United States she resumed her career with the Bureau of Prisons and continued her studies at George Washington University under the G. I. Bill of Rights. She graduated from George Washington University with a Bachelor’s of Science degree in Sociology in 1950. She married William J Husic in June 1959 and took on the responsibility of raising his three children, who were aged 7, 11, and 13 at the time. At that time, she moved from her apartment at McLean Gardens to the family home in Chevy Chase, Maryland, where she resided until her death. After retirement, from the Bureau of Prisons on June 15, 1972, Madelaine enjoyed taking art classes at Montgomery College in Rockville, Maryland. She earned an Associate in Arts degree in January of 1976, and continued with additional painting and silk-screening classes through 1982. Her home displays many examples of her artistic talents. She was an active member of The George Washington University Alumni Association, and the Potomac Appalachian Trail Club. The family were long-time members of Blessed Sacrament Parish in Chevy Chase, Maryland. The children went to elementary school there, daughter Mary was married there, and the funeral of Madelaine’s husband William Husic Sr. was held there. In more recent years, they began attending Little Flower parish, in Bethesda, Maryland, because of the easier drive. Although Madelaine was very frugal with her personal finances, she was incredibly generous in her financial support of many organizations, especially those that supported Catholic missionaries and other Catholic causes. She was the matriarch of the Trumper family, organizing the family reunion after WWII, which still continues annually at the Trumper family home in Pana. She is survived by: DAUGHTER Mary Kuta SPOUSE William OF Laytonsville, Maryland SON Mike Husic SPOUSE Sharon OF Silver Spring, Maryland BROTHER Leo "Jr." Trumper SPOUSE Mary Louise OF Assumption, Illinois SISTER Denise Hayes OF Pana, Illinois BROTHER Richard Trumper SPOUSE Mary OF Pana, Illinois GRANDDAUGHER Jennifer Magin OF Olney, Maryland GRANDSON John Kuta SPOUSE Lisa OF Ellicott City, Maryland GRANDSON Michael Kuta SPOUSE Heather OF Washington, DC GRANDSON Jeremy Husic SPOUSE Tara OF Washington, Michigan GRANDSON Toby Husic SPOUSE Michelle OF Howell, Michigan GREAT GRANDCHILDREN Eight (8) PRECEDED IN DEATH BY Parents, Husband, Son William Husic, Brothers: Antoine Eugene, and Victor Trumper, Grandson Robert Magin

The family of Madelaine Trumper Husic created this Life Tributes page to make it easy to share your memories.

Send flowers to the Husic family.