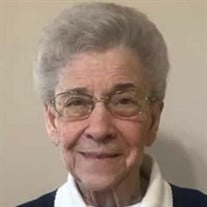 Madolyn Green, 87 of Pana, Illinois passed away at her home on Saturday, May 28, 2022 after a long illness. A Funeral Mass will be celebrated on Wednesday, June 1, 2022 at 11:00 AM in St. Patrick’s Catholic Church, Pana with Fathers Joseph Havrilka and Rodney A. Schwartz officiating. Visitation will also be Wednesday, June 1, 2022 in St. Patrick’s Catholic Church beginning at 9:00 AM until time of Mass. Burial will be in Calvary Cemetery, Pana Township, Christian County, Illinois. Madolyn was born to the late Louis and Agnes (Havrilka) in the home she grew up in on North Poplar Street in Pana. Madolyn was a graduate of Sacred Heart School and Pana Township High School, Class of 1953. She was a member of St. Patrick’s Catholic Church, Pana. She started her working career as a teenager at George’s Candy Shop and sold popcorn from a cart in the downtown of Pana. For many years she was a cook at Pana High School. Madolyn definitely made her impact on her little corner of the world. She was a meticulous housekeeper, down to washing the rocks in her driveway. Madolyn married Kenneth “Sam” Cloe on November 18, 1954. Together they had three children: Gail Cloe (Herb Haines), Kenneth L. Cloe, and Patti (Gus) Siegert, all of Pana. Grandchildren include Rori, Maggie, Abbie, Estella, Samantha, Jack, Weslee, and Patrick as well as 21 Great-Grandchildren and 5 Great-Great-Grandchildren. Madolyn married Melvin Green on October 10, 1989 and he survives. Madolyn is also survived by Step-Children: Jeff, Greg, Dawn, John, Dana, and Jacob Green, all of St. Louis, Missouri. Madolyn was very proud of her humble beginnings as a coal mining household which included her Siblings: Dallas (Audrey) Dudra, Richard (Eileen) Dudra, Rosemary (Ty) Corso, Rosalie (Larry) Morgan, Rita (Charlie) Kuntzman, Bobby (Jessie) Dudra, and Phyllis Zumwalt. Madolyn was preceded in death by her Parents, First Husband, Son: Kenny, Grandson: Justin Cloe, a Great-Granddaughter: Leeandra Kaiser, Brother: Richard Dudra, and Brothers-in-Law: Larry Morgan and Ty Corso.

Madolyn Green, 87 of Pana, Illinois passed away at her home on Saturday, May 28, 2022 after a long illness. A Funeral Mass will be celebrated on Wednesday, June 1, 2022 at 11:00 AM in St. Patrick&#8217;s Catholic Church, Pana with Fathers Joseph... View Obituary & Service Information

The family of Madolyn Green created this Life Tributes page to make it easy to share your memories.

Madolyn Green, 87 of Pana, Illinois passed away at her home on...

Send flowers to the Green family.