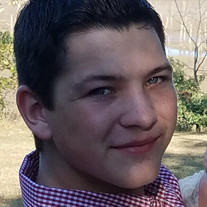 Marion Ty “Bubba” Smith of Harrisburg passed away peacefully with his family by his side, May 25, 2018 at the age of 17. He was born on October 14, 2000 in Taylorville, Illinois. Marion spent most of his life in Pana, Illinois as a Pana Panther. He loved playing football, deer hunting, fishing and spending time on his Grandpa John’s farm. After Marion turned 16, he moved with his family to Harrisburg, Arkansas where he played football for the Harrisburg Hornets, and was employed at Food Giant as a carry-out attendant. Marion loved his family dearly and was selfless in his love and devotion to his younger nieces, nephews, and cousins. They each looked up to him as their hero. Marion has such a great sense of humor and exhibited a tremendous zest for life. Marion is preceded in death by his niece, Remington Paschal of Harrisburg, Arkansas, step-dad, Scott “Hoss” Westendorf of Teutopolis, Illinois, and Ken and Shirley Ackerman of Fargo, North Dakota. Marion is survived by his parents: Misty and Brannon Smith of Harrisburg, Arkansas and Shawn and Sherri Smith of Fargo, North Dakota, siblings: Samantha and Camron Ramsey of Harrisburg, Arkansas, Hayle Smith of Mason, Illinois, Scott Almer of Fargo, North Dakota, grandparents: Mary Ann Moon of Smithfield, Virginia, John and Naomi Winterrowd of Mason, Illinois, Kathy and Danny Smith of Pana, Illinois, Val Rhodes of Shelbyville, Illinois, and Tony and Marilyn Smith of Herrick, Illinois. Visitation will be May 31 at 3:00 with the Memorial Service at 4:00 at First Baptist Church in Harrisburg, Arkansas. There will be a dinner that follows at the Glissen Center. Contributions can be made to Marion on his “Go Fund” me page, under “Celebration of Life ~ Smith Family.”

The family of Marion Ty "Bubba" Smith created this Life Tributes page to make it easy to share your memories.

Send flowers to the Smith family.