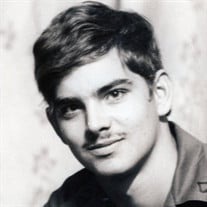 Michael A. Banning, 68 of Pana, Illinois died Thursday, February 20, 2020 at 8:56 AM at his residence in Pana. Funeral services will be Monday, February 24, 2020 at 10:00 AM in St. Patrick's Catholic Church, Pana with Fr. Rodney A. Schwartz officiating. Visitation will be 2:00 PM to 4:00 PM on Sunday, February 23, 2020 at Kennedy & Sons Funeral Home in Pana with a 3:45 PM Rosary Service. Burial will be in Calvary Cemetery, Pana Township, Christian County, Illinois with Military Rites by Pana Veterans Honor Guard. The family has requested that in lieu of flowers, donations be made to Sacred Heart School of Pana. Michael A. Banning was born Sunday, February 17, 1952 in Pana, Illinois the oldest child of Ben and Florence “Jake” (maiden name Jacob) Banning. He was raised in Pana attending Sacred Heart School and Pana High School, where he graduated with the Class of 1970. Shortly following his high school graduation, Michael entered the United States Army and was stationed in Germany during the later years of the Vietnam Conflict where he worked as a generator repairman. Michael later transferred to the United States Army Reserves, from which he was honorably discharged on July 29, 1976. He was a member of St. Patrick’s Catholic Church, Pana and Pana Knights of Columbus, Council #896. Mike enjoyed reading books, playing chess, watching westerns, EWTN and particularly enjoyed the Andy Griffith Show. Michael A. Banning is survived by his Parents: Ben and “Jake” Banning of Pana; Brothers: Kenny (Mary) Banning of Pana, Phil (Cheryl) Banning of Pana, Bill Banning, and Rich (Lyn) Banning of Sullivan, Illinois; Sisters: Judy Banning of Decatur, Julie (Art) Thorpe of Baltimore, Maryland, and Janet Walk of Kirkwood, Missouri; twenty (20) Nieces and Nephews and seventeen (17) Great-Nieces and Great-Nephews. Michael is preceded in death by a Brother: Joe Banning and a Brother-in-Law: Karl Walk.

The family of Michael A Banning created this Life Tributes page to make it easy to share your memories.

Send flowers to the Banning family.