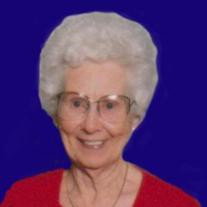 Mildred E. Moore, 90 of Shelbyville, Illinois passed away suddenly Wednesday, March 17 at Springfield Memorial Hospital. Mrs. Mildred E. Moore was born December 9, 1919 in Brownstown, Illinois, the child of John L. Cable and Etta B. (maiden name Burris). She was married to Charles R. Moore on Wednesday, April 6, 1938 in St. Louis, Missouri. Mr. Moore died December 30 2003. She was a loving wife, mother, grandmother, great-grandmother and great-great grandmother. She is survived by many nieces and nephews who were an active part of her life. She attended Christ Tabernacle Church in Herrick. She enjoyed her family and celebrating family parties, events, and visiting with neighbors. She is survived by her daughters Mr. Jack (Reba) Williams of Decatur, and Mr. James (Janet) Goode of Newark, OH; and Brother Leroy Cable of Herrick. She is also survived by four grandchildren, eight great grandchildren, and two great-great grandchildren, and two of Minnie’s special children. She was preceded in death by her parents, husband, brother, Stanley, twins Charles and Dale in infancy, and a daughter Beverly Moore. She will be missed. She is reunited with her husband in heaven.

The family of Mildred Moore created this Life Tributes page to make it easy to share your memories.

Send flowers to the Moore family.