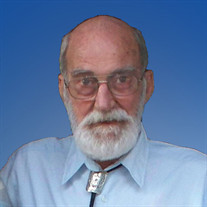 Richard C. Trumper, 87, of Pine Beach, NJ and Pana, IL, passed away peacefully surrounded by family on April 10, 2014. Visitation will held on Thursday, April 24, 2014 at Kennedy & Sons Funeral Home Pana, IL from 5:00 PM-7:00PM with a 7:00 PM Rosary. Mass of Christian Burial will be held Friday, April 25, 2014 at 10:00 AM at St. Patrick’s Catholic Church Rev. Rodney Schwartz officiating. Burial will follow at Calvary Cemetery also in Pana. Richard was born on January 21, 1927 in Pana, Illinois where he grew up and later met and married Mary Comisky in 1953. Richard attended Pana High School and Catholic University in Washington, D.C. He served in the Navy at the end of WWII. After he worked at Decatur Signal Depot, they moved their young family to Pine Beach, NJ in 1961 to work at Fort Monmouth. Richard devoted his life selflessly to his wife and children. He enjoyed traveling with his wife to every part of this country, many times taking their grandchildren. Every summer would find Richard and his family in Pana visiting their extended family for an annual reunion which began in 1946, at the home where he grew up; a tradition in the Trumper family to this day. One recurring travel was a decade’s long series of yearly trips to California to pan for gold. An accomplished handyman, he built much of his own mining gear. His children and grandchildren joined him on his gold expeditions. Richard enjoyed doing things with his children, grandchildren, nieces and nephews. Activities for the young, fishing and frog hunting were never far from his focus. He began the Pine Beach Boy Scouts and was Troop Master in the late sixties. He was a member of St. Barnabas in Bayville, New Jersey and St. Patrick’s in Pana. His Catholic faith was very important in his life, attending Mass wherever he found himself in this country. He is survived by his brother Leo and Mary Louise Trumper of Assumption, his sister Denise Hayes of Pana, his sister-in-law LaVon (Keith) Trumper of Albert City, Iowa, his wife Mary of 61 years, his five children, Victor and Corinna Trumper of Lakewood, New Jersey Richard and Karen Trumper of Beachwood, New Jersey, David and Augustina Trumper of Bayville, New Jersey, Robert Trumper of Pine Beach, and Kathleen and Tony Zacarro of Bayville, New Jersey. Grandsons Victor Trumper, Nicholas Trumper, Michael Trumper of Lakewood, New Jersey. Grandson Richard G. Trumper, and granddaughter Diana McIndoe and her husband Adam of Beachwood, New Jersey, granddaughters Olivia Trumper and Rachel Trumper of Bayville, New Jersey, granddaughter Melissa Fodor and Ian Szoboszlay of Pine Beach, New Jersey. Grandson Joshua Trumper of Toms River, New Jersey, granddaughter Megan Zaccaro of Pine Beach, New Jersey, great-granddaughters Allison and Hailey Fodor of Pine Beach new Jersey, and countless nieces and nephews who will miss him dearly but look forward to a reunion in heaven. Richard was predeceased by his parents Leo and Lena (Yenck) Trumper of Pana, his siblings Eugene, Antoine, Victor, and Madelaine (Husic).

The family of Richard C Trumper created this Life Tributes page to make it easy to share your memories.

Send flowers to the Trumper family.