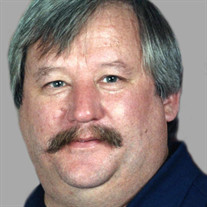 Robert Oleksy, 64 of Decatur, Illinois formerly of Pana died Tuesday, October 13, 2020 at Kindred Hospital Peoria. Funeral Services will be 10:00 AM on Monday, October 19, 2020 at Kennedy & Sons Funeral Home in Pana with Fr. Rodney A. Schwartz officiating. Visitation will be at 9:00 AM until hour of service, also on Monday, October 19, 2020 at Kennedy & Sons. Burial be in Calvary Cemetery, Pana Township, Christian County, Illinois. Robert Oleksy was born May 9, 1956 in Pana, Illinois the son of Frank and Rosemary (maiden name Cvengros) Oleksy. He attended Sacred Heart School and Pana High School where he graduated with the Class of 1974. He was retired from Firestone Tire, Decatur. Robert Oleksy is survived by his Wife: Debbie of Decatur; Sons: Kelley Woodard of Decatur and Brian Woodard (Stephanie) of Galesburg; Daughter: Amy Dent (Lee) of Decatur; Grandchildren: Kaylee, Delaney, Brianna, Andy, Issz, and Jaxon Woodard, all at home and Milani, Myrakle, and Lee Dent, Jr., all at home. Robert is preceded in death by his Parents and Brother: John, who died September, 2016.

The family of Robert "Bob" Oleksy created this Life Tributes page to make it easy to share your memories.

Send flowers to the Oleksy family.