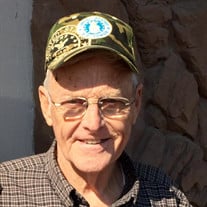 William "Bill" Dean, 84, of Pana, Illinois formerly of Taylorville died Thursday, October 24, 2019 at 12:31 PM at Taylorville Memorial Hospital. William "Bill" Dean was born Friday, May 31, 1935 in Taylorville, Illinois, the son of Vernard and Margaret (Farr) Dean. Bill was raised in Kincaid, Illinois and attended school there. He lived most of his life in the Taylorville and Springfield areas and the last 16 years in the rural Oconee and Pana areas. He was a veteran of the United States Air Force, Air Force Reserve, and Air National Guard. Bill married Rosie June Brown on October 4, 2003 in Oak Valley Church, Ramsey and was most recently a member of First United Pentecostal Church of Pana. Bill was retired from sales and marketing. Bill was a drummer, and music was his passion. He played the drums with various bands during his musical career, including the Miles Lilly Band. Bill loved most all kinds of music, especially jazz and gospel. He was also very proud of the fact that he could participate in the music program in his church up until the age of 82. William “Bill” Dean is survived by Wife: Rosie J. Dean of Pana; Daughters: April K. (Mark) Hannant of Taylorville and Jennifer (Chuck) Martz of Indianola, Iowa; Sons: Aaron Dean (Bobbie Durbin) of Owaneco and Marc (Sheila) Gilpin of Marietta, Georgia; Step-Daughter: Jacquie (Joe) Lees of Pana; 7 Grandchildren: Erin Hannant; Alyssa, Emma, Will and Shane Martz; Reagan and Austin Gilpin; 2 Step-Grandchildren: Erica Lees (Scott Hunter) and Joshua Lees (Michelle Mosteller); 2 Great-Grandchildren: Brayden and Benjamin Martz; 4 Step Great-Grandchildren: Carson, Spencer, and Ryker Peters; and Sophia Lees; Brother: Bob (Yolanda) Dean of Jeiseyville and Sister: Patricia Eades of Colorado; and several nieces, nephews, and cousins. Bill is preceded in death by his Parents and Brother: Bernard Dean. Memorials may be made to First United Pentecostal Church of Pana.

The family of William "Bill" Dean created this Life Tributes page to make it easy to share your memories.

Send flowers to the Dean family.